Breeding season for sea turtles starts in May and last hatchlings hatchs from the their nest in September. A female make 3 to 4 nest in a nesting season. Male turtles leave the nesting beaches just after mating. 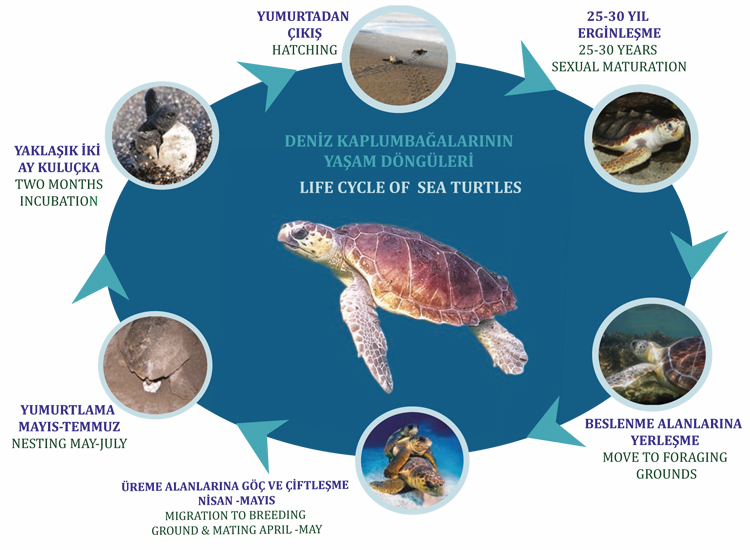 Marine turtles mate in coastal waters, lagoons or in lakes two weeks before nesting (April-May). Occasionaly, only one of the three emergences from sea ends up with succesful egg-laying and the others are 'false crawls' to find a suitable nesting place and to facilitate the egg movement through the body.They choose a site where the tidal waves will not affect on the nest and they move very slowly on land. The period of incubation lasts about two months. The young hatchlings hatch in a 1-2 days of time and wait underneath the ground until night, and then they dig their way to surface. After reaching the surface, the young hatchlings start on their journey to the sea. They use the reflection coming from the sea. And it's seen that most of the hatchlings move to different directions in the photo polluted areas. Affects by artificial lights may lead to a fatal effect on hatchlings. Their sexually mature is at the age of 25-30 years. Therefore, we do not have much information about their sexual maturity during this period of time in their natural life. Fishing nets, incidental captures, speed boats have negative effects on their life.

Green and black sea turtles have finely serrated jaws adapted for a vegetarian diet of sea grasses and algae. In adulthood, they are the only herbivorous sea turtles, but in an aquarium environment all sea turtle species can be maintained on a carnivorous diet. Loggerheads' and ridleys' jaws are adapted for crushing and grinding. Their diet consists primarily of crabs, mollusks, shrimps, jellyfish, and vegetation. A hawksbill has a narrow head with jaws meeting at an acute angle, adapted for getting food from crevices in coral reefs. They eat sponges, tunicates, shrimps, and squids. Leatherbacks have delicate scissorlike jaws that would be damaged by anything other than their normal diet of jellyfish, tunicates, and other soft-bodied animals. The mouth cavity and throat are lined with papillae (spinelike projections) pointed backward to help them swallow soft foods. Researchers continue to study the feeding habits of flatbacks. There is evidence that they are opportunistic feeders that eat seaweeds, cuttlefish, and sea cucumbers. Some species change eating habits as they age. For instance, green sea turtles are mainly carnivorous from hatchling until juvenile size; they then progressively shift to an herbivorous diet.

Adult females migrate to their natal beach and lay eggs in the sand. Hatchlings undergo a short but high-risk, due to predators, journey to the shoreline, and then swim to the open ocean. Initially their swimming direction is oriented into the waves; near shore the waves provide an indication of the direction of the open ocean. Their migration then continues for hundreds or thousands of kilometers into the ocean, into favorable feeding grounds. Turtles may actually use the geomagnetic field to tell them their location (of course, the open ocean has no landmarks); if this is the case, then their magnetoperception system seems to work on a more refined level than that of birds, which is thought to provide directional but not locational information. Some scientists think that sea turtles probably use the geomagnetic field to orient their swim in the deep ocean, but they would also have celestial cues available to them. The directional vector of sea turtles is probably determined genetically, although their is no data to support this assumption. Also intriguing but unexplained is their ability to find their way precisely back to their natal beach over their vast travel distance.